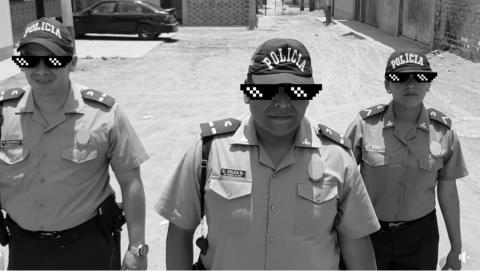 Peru’s national police was known as a serious and somewhat unfriendly institution. Social media has changed all that. Now, police is family.

Two young women are strolling in a poor neighborhood. A group of young men armed with water-filled pistols and buckets are waiting to attack them. However, three police officers show up and, miraculously, the boys’ pistols and buckets turn into roses and guitars. The camera then zooms out and in to a new scene: a little girl is shown turning on the water tap, but to no avail: no water comes out. Miraculously again, a policeman shows up with a bucket of water and hugs the girl.

“The water you waste is water that other people need” is what a male voice says at the end.

It is neither a cheap soap opera trailer nor a social TV ad, but a video created by Uncle PNP, the friendly name Peruvians use to refer to the social media account of their national police (PNP is the Spanish acronym for Policía Nacional del Perú).

But this film is just an example Peruvian police’s bigger effort to change its image and improve communication with ordinary people through social media.

The short water film, which had a mind-boggling 1.7 million views within only a couple of weeks on Facebook, was created to make people more aware of the amount of water wasted in February, a summer month in Peru when carnivals, an old local tradition, are all the rage. One of the customs during these celebrations, to throw water to people in the street, usually to young women, has been criticized not only because of the large amount of potable water that goes, literally, down the drain, but also because of the discomfort and anxiety it causes to women, especially when men take advantage of this tradition to harass them.

Uncle PNP is trying to expose such issues in an original and entertaining way, setting an example of how social media can help an institution like the police explain its work to the general public.

The popularity of Uncle PNP began to grow in the beginning of 2016 when a team of three police officers, Augusto Zea, Carlos López and Giancarlo Díaz, was assigned to handle the social media account of the institution.

They started by trolling some events advertised on Facebook that looked likely to be illegal such as plans to loot a supermarket or informal drag racings. In both cases, Uncle PNP posted the following message: “See you there, I hope everyone who replied that they will attend this event will have their ID card ready for a night in jail.” Facebook users were shocked. The police’s post was widely shared and, as a result, both events got canceled. This active participation in social media came with structural changes because the team analyzes all the outcomes before posting a message and special police units are ready to intervene if it is needed.

Run now by a team of six police officers, Uncle PNP is handling serious issues Peruvians are faced with. But it continues to address such problems in an entertaining manner that captures the public’s attention. Its humorous messages as well as its creative and funny memes and videos are often found among the trendiest Facebook topics, making Uncle PNP a space where Peruvians feel closely connected to the police and their work.

One video, aimed at convincing people not to drive after indulging in alcohol, features an animated dinosaur wearing sunglasses that dances on a song with the following lyrics:

“If someone did not love you back, do not drown in sadness/If you go for drinks to a bar, you should not take the car with you/You received a free drink, you ended up drugged and alone/Before going for a drink, remember what can happen to you/It is advice that I give you because I am Uncle PNP.”

The Uncle PNP team had a very hard task: they had to shake a prejudiced view of the Peruvian police as a dark-humored institution, Augusto Zea, one of the Uncle PNP team members, told Peru21.pe, a news portal. “The first assignments were not easy, particularly because we had to be “cool”, but without exceeding the limit,” Mr Zea said. The team was required to produce snippets of content that were funny, but also “elegant” to preserve the public image of the National Police of Peru as a serious institution.

The team was up to the task. Less than a year since its creation, the Uncle PNP account won Digi 2016, the highest national award for the best digital communication campaign awarded by the local office of the Interactive Advertising Bureau, a global online advertising association. 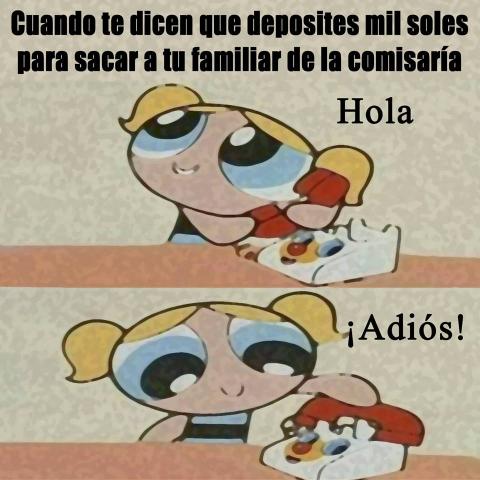 "When someone calls and ask you to make a deposit of one thousand soles in order to get your family member out of the police station… Bubbles: Hi! Bubbles: Bye!” - Caption posted by Uncle PNP: “Beware of calls that are scams. Remember that for these cases you can contact the Research Division of Scams and Other Frauds by telephone — DIRINCRI PNP at 431–8179. #DoLikeBubbles”

Peru lags behind other South American nations when it comes to internet penetration with less than 70% of people online. Nonetheless, over 22 million of its 32.5 million people are using the internet. Of those, more than 20 million are Facebook users, making Facebook the preferred platform for those who want to reach a high number of Peruvians. Only Uruguay, Chile, Argentina and Ecuador in South America have higher Facebook use rates, according to research from MediaPowerMonitor.

Thanks to social media, Peruvian police does a better job in communicating with people. In its videos and posts, it uses celebrities, popular phrases, famous movie scenes or lyrics of well-known songs.

Its social media page has been encouraging people to refrain from drinking alcohol when taking the wheel, to double check information found on the internet to avoid fraud, to cycle more to reduce traffic jam and to report assaults or harassment to help police better protect people. Uncle PNP replies to people’s queries in a trice, giving them advice or tagging other public institutions on Facebook that are in a better position to help. And it works.

Today, more than one million people follow the Peruvian police account on Facebook. There is no better proof that people always enjoy taking advice from their uncles.

Katherine Durand is a Peruvian lawyer currently enrolled in the MA in Public Policy, with specialization in Human Rights and Social Justice.