“They Can Kill One of Us, But Not All of Us” 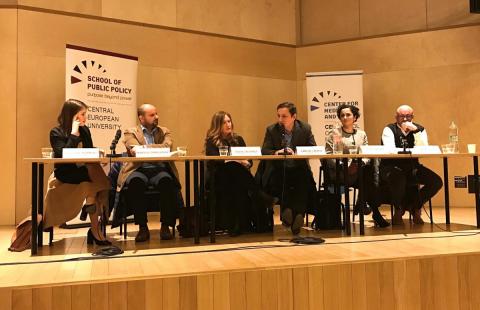 The safe space of journalists has collapsed; the manifestation of populism can be connected to the dramatic increase of attacks against journalists. The past few years have been pretty dire for media freedom, and the world often seems to just stand by. 140 media workers have been killed in the last 9 years, but continuing the work of murdered journalists means a certain protection for others. Female journalists are often targeted with gender specific threats. There is an unprecedented level of collusion of media owners and governments. Takeaways from the discussion Assaults on Journalists, Assaults on Journalism.

Murders of investigative journalists in Europe shook the public in the past two years. Safety of journalists is up on media agenda again. Journalists are under threat globally, and these threats are multifold: from physical threats to jail time, to legal and financial pressures, to online harassment (especially for women journalists) and cyberattacks, these threats abound. Members of organized crime, governments and corporate power lay heavily on journalists to influence stories. This is happening at a time when quality journalism is going through a crisis of trust and funding.

How are these processes connected? What can we learn from past crises? International organizations are active on this front (see for example the latest OSCE Ministerial Council decision on safety of journalists), and there are initiatives from governments and corporations to fight these trends. What is the role of different players (international organizations, governments, corporations, researchers, NGOs, unions, media outlets, policy makers, individual journalists, the public etc.) in finding remedies and what kind of alliances may be formed? International experts tried to find answers to these question at the panel discussion Assaults on Journalists, Assaults on Journalism organized by the School of Public Policy and its Center for Media, Data and Society (CMDS) at Central European University.

The Collapse of the Safe Space 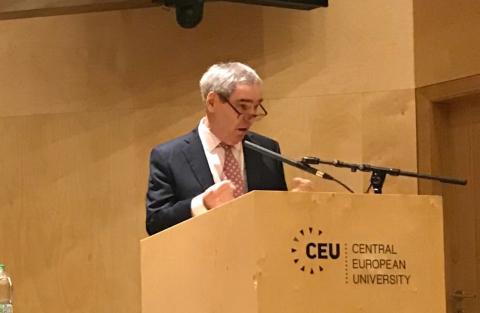 The event was opened by Michael Ignatieff, President and Rector of CEU, who said he had personal reasons for being interested in the topic: he himself was being shot at twice. First in the early 90s, when he was with a BBC crew in Vukovar, Croatia, then in Kabul in 1997, after it had been taken over by the Taliban. The purpose of the attackers was the same: they wanted to prevent journalists from getting the story.

As he said, there had been an assumption among journalists that they were working in a safe space by not taking sides, but this safe space has collapsed, it isn’t respected any more, which means a serious threat. This also means that often only young freelancers try to cover stories at dangerous places, who don’t have insurance or even a team backing them, and often there is no way out for them if things go bad. It has two very important and dangerous consequences: journalism has become extremely casualized, on the other hand, the world doesn’t know about a lot of important issues, because they are not covered.

Populism and an Increase of Attacks

After the introduction by Michael Ignatieff, moderator Valerie Hopkins, South-East Europe Correspondent for the Financial Times introduced the panelists:

Sejal Parmar said that the topic safety of journalists had received more media coverage recently, because the murders of journalists Ján Kuciak, Daphne Caruana Galiza and Jamal Khashoggi attracted transnational attention. Still, populist leaders around the world openly attack media, calling journalists “enemies of the people” or “fake news”. According to Sejal Parmar, the manifestation of populism can be connected to the dramatic increase of attacks, even though there are basic obligations by countries as well as international organizations in case of such attacks: investigation, accountability, appropriate remedies, but first of all they should prevent such attacks from happening.

Valerie Hopkins asked Peter Bardy about what Slovakia had done in the 12 months since the murder of his colleague, Ján Kuciak. Ján wrote about organized crime, and Peter Bardy expected politicians to do something, to protect them, but nothing happened. As he said, politicians saw it as a political problem, so he thinks that “it is the responsibility of all of us, we all have to protect freedom and journalism”. 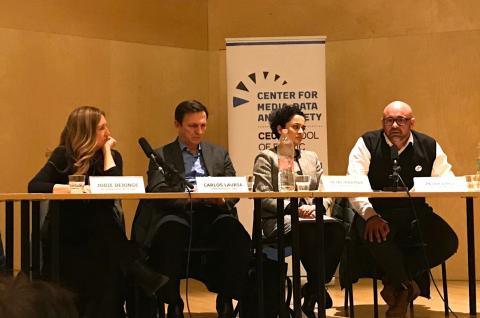 The past few years have been pretty dire for media freedom, added Carlos Lauría. There have been a lot of attacks and many cases remain unsolved. There is a need to “raise the cost of attacking journalists”, and one step in this direction is getting together and forming alliances. He talked about Tim Lopes Project in Brazil: every time a journalist is killed, they send a team to investigate the case, and if the motive of the murder was his or her work, then they continue it. This also puts pressure on authorities.

It really can make a difference, continued Jodie DeJonge, if journalists continue the work of murdered colleagues. However, when it is about security, OCCRP doesn’t rely on anyone else, “we try to protect ourselves”.

She also talked about her experience in Cambodia, where she was the last editor-in-chief of The Cambodia Daily, and where “the government shut down free press in a year” by using the law against journalists and media outlets. “There are a lot of ways to kill journalism and the world just seems to stand by and do nothing”, she said.

“All these things happen in our region as well”, said Marius Dragomir. At CMDS, “we are looking at the bigger picture”, at the framework in which journalism operates, he continued, and one major trend to observe is media capture: an unprecedented level of collusion of oligarchs, media owners and governments. 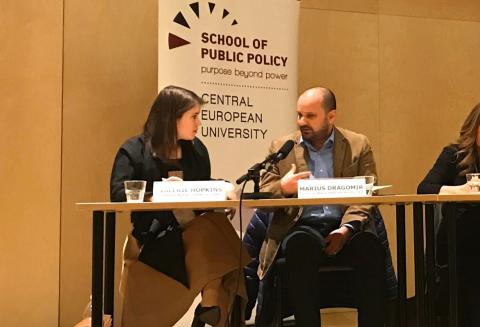 It happens all over the world, but Central and Eastern Europe is a textbook example. It has four components: the government occupies regulation, controls the public media through funding and appointing the leaders, interferes heavily in media funding by rewarding friendly outlets with state advertisements and withdrawing them from independent ones, and there is a takeover of private ownership as well. If this media capture happens, there will be no space for journalists to operate.

Marius Dragomir mentioned another worrying trend: many foreign funders have left the region in the past years: 11 out of 17 since 2006.

Valerie Hopkins asked the panelists whether states or international organizations can protect journalists. There is a consensus on the safety of journalists in the United Nations, Sejal Parmar said, there are more and more resolutions, however, the number of attacks increases at the same time and the vast majority does not attract political attention.

140 media workers have been killed in the last 9 years. Valerie Hopkins asked whether the case of Marie Colvin, the journalist of Sunday Times who was killed in Homs, Syria in 2012 is a precedent, and Sejal Parmar thinks the verdict that awarded damages against the Assad regime based on American law is a symbolic and significant step, as the verdict states that she was killed for her reporting.

“We Realized That We Are Not Immortal”

Peter Bardy acknowledges that protection is still their weakness, as he said, they had no experience in how to do it. “After the murder of my colleague we realized that we are not immortal”, but now they are collaborating with OCCRP and work on hiding communication and sensitive data. He still said: “How can I secure my own people? I don’t know how to protect us. I just hope it was the last time mafia killed one of us.”

Carlos Lauría mentioned examples from Pakistan. After the murder of several journalists, senior media professionals decided to work together, they started to report attacks, shared practical information with each other. This also contributed to the fact that, although there is still violence, the threat has changed.

“We also realized that sharing data means protection”, added Peter Bardy. So they do it now, and as he put it: “They can kill one of us, but not all of us.”

Valerie Hopkins asked the panelists also about particular challenges female journalists have to face. For Jodie DeJonge, it is the most difficult to see what President Trump is doing, because “autocrats around the world see him as an example”. When he labels journalists as the enemy, it affects all journalists around the world. She thinks that women often aren’t seen as a threat, which creates opportunities for them, but she also knows that others may have different experience.

The discussion was followed by the screening of the film A Dark Place, which focuses on the stories of women journalists as well as experts on gender and media from a number of OSCE participating States – Finland, Serbia, Spain, the Russian Federation, Turkey, the United Kingdom and the United States. The documentary, the first of its kind, explores the phenomenon of online harassment of female journalists, and how the issues this raises go beyond gender equality by directly impacting the freedom of the media and the fundamental human right of members of society to access a plurality of information. 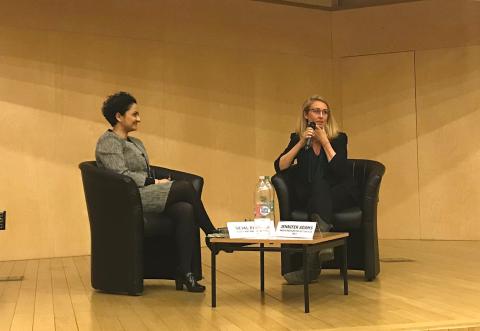 The film was introduced by Jennifer Adams, Media Freedom Project Officer in the Office of the OSCE Representative on Freedom of the Media. As she said, the film was part of a broader project connected to safety of female journalists online, which aimed to provide tools for harassed women.

Female journalists are often targeted with gender specific threats, and there is no location that’s worse than the online sphere. The response of authorities and media outlets can be very different, she added. They also wanted to tackle the research gap, as there aren’t many studies on this field. The premiere of the movie was on December 10, in Vienna, since then it has been screened in Spain and in Geneva, and now at CEU. Later it will be available for journalists and universities as well.