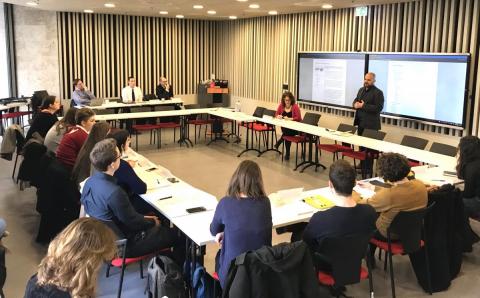 Not all people like them, but vegetables are essential to stay healthy – just like quality news. Misinformation is everywhere and spreads quickly because it is designed to get an emotional response. The challenge is not to produce information, but to get attention, and messaging platforms mean the real battlefield. These are just a few of the most important takeaways from the Workshop on Disinformation and Propaganda. As one participating student concluded: “I have never learnt so much in such a short period”.

“Misinformation is spreading like fire and it is extremely important for media literacy to catch up. Particularly in Hungary where propaganda is rife, any responsible institution should step up efforts to teach young people how to deal with lies. The workshop was our contribution to those efforts”, says Marius Dragomir, Director of Center for Media, Data and Society about the Workshop on Disinformation and Propaganda, that took place at Central European University between February 25-27.

“We are always told at our universities that the U.S. is in a central position in so many fields, leading scholars are there, most ideas are coming from there – and now we have American experts here, telling us how these things work”, said Blanka Kovács, one of the students.

There were three American experts at the workshop: Daniel Funke, Fact-Checking Reporter at Poynter; Oren Levine, Director of Innovation at International Center for Journalists; and Charles Salter, Chief Operating Officer at The News Literacy Project.

A Battle for Attention

Oren Levine thinks that it is complicated to differentiate between disinformation, misinformation and information, but one way to break down this complex problem is to look at content and intent as well. Most researches focus on the supply side, but it is important to look at the demand side as well: why people consume misinformation, why they like and believe it. This raises questions about trust, business models and sustainability as well, however, understanding these is necessary to counter misinformation. 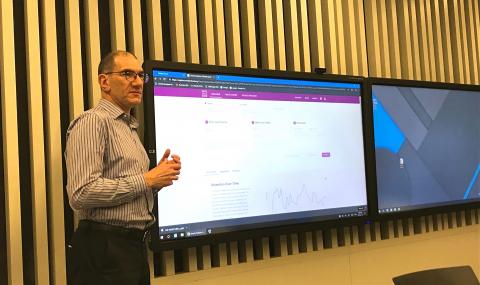 He also thinks that we experience a battle for attention. Everyone can publish now, but flooding people with information is a tool to dominate them. The challenge is not to produce information, but to get attention.

Social media plays a crucial role in this battle, but Oren Levine reminded everyone to pay attention to WhatsApp and other messaging platforms as well. As he said, “that’s the real battlefield”, since information is spread through friends and family there, so people are more likely to believe it. This gives a real power to these platforms.

Oren Levine also warned the participants about the danger of amplifying misinformation. As he put it, instead of using the same terminology, sometimes it is worth considering the concept of strategic silence.

According to him, if someone realizes the intent of misinformation producers, then the responses can be better. There are various intents: to cause harm, to mislead or confuse the audience, or to make people upset.

The first problem of covering misinformation is the definition, said Daniel Funke. The difference between misinformation and disinformation is in the intent: the latter one always comes with a specific goal. The term “fake news” is often used as well, however, as it has been weaponized, “it doesn’t really mean anything anymore”.

But there are more categories when we talk about mis- and disinformation; First Draft identifies seven distinct types of problematic content: 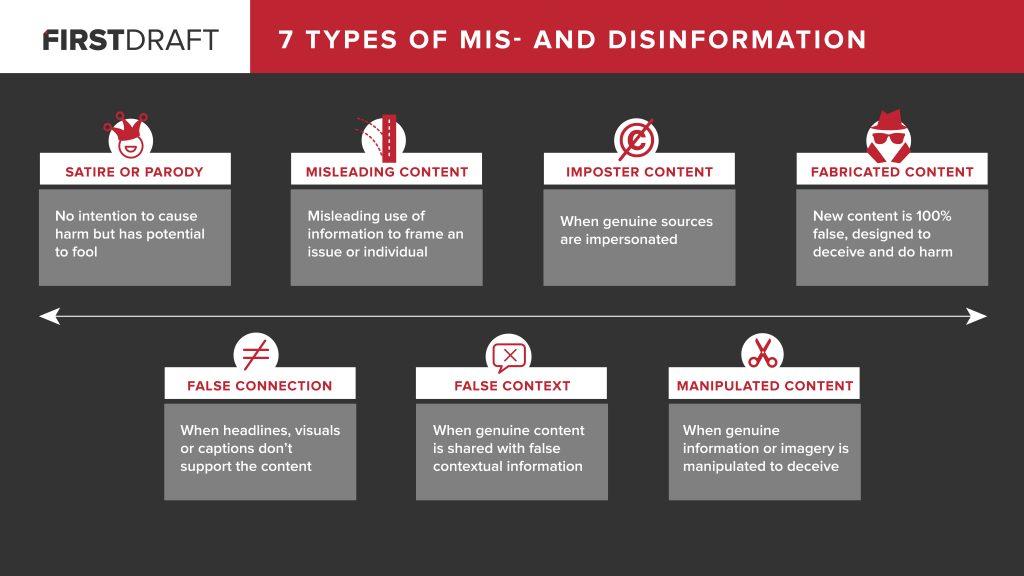 It is also important to remember that misinformation is not a new phenomenon: Daniel Funke reminded everyone on the yellow journalism in the U.S. at the end of the 19th century. Misinformation is not necessarily political either, it is enough to think about anti-vaccination theories.

Daniel Funke also talked about some common characteristics of misinformation content. Sites spreading it often pose as news outlets, but the content is fake. Social media rumors fuel them – the roots of this can be found in the hoax email chains in the 90s. They use manipulated photos or out of context videos. Imposter content often can be found on such sites as well.

Recently there has been a lot of talk about deepfakes as well, especially after this video had been published:

Nevertheless, according to Daniel Funke, it still takes weeks to create such videos, and a special knowledge is needed as well as a lot of resources.

Still, “online fakery is literally everywhere”, said Daniel Funke. Every content one can possibly think of can be fake, and such content can lead to real life attacks, as it happened in India or during the Rohingya crisis in Myanmar, or it can also cause panic. But above all it makes harder to trust real news, even though, as he said, “good quality news is like eating vegetables. Not all people are fond of it, but some do and everyone needs them to stay healthy.”

Daniel Funke also provided an introduction to fact-checking with sharing tools, tips and tricks. He believes that the key to fact-checking is transparency, which enables to be credible, including stating clearly who funds the fact-checkers and paying attention to balance.

Fact-checking comes with ethical questions as well. First of all, decisions have to be made on what to fact-check. Is it enough that readers ask to debunk certain claims? Is it necessary to fact-check rhetorical devices or satire? This is the hardest part according to Daniel Funke, but he thinks that decisions should be based on news-judgement.

Designed to Get an Emotional Response

Charles Salter talked about the importance of teaching news literacy. Information available to people doubles every second day, and it is a big challenge to realize what is real and what is not: technology is getting better and better, and there are sites that only exist to misinform people. 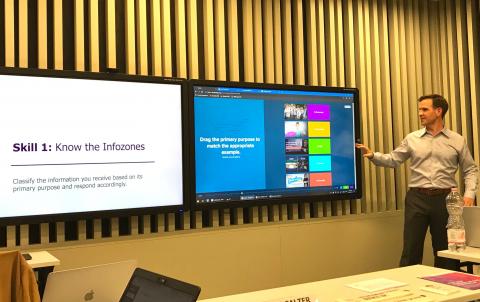 He mentioned a Twitter research, which showed that false stories have 70% more chance to get retweeted. One of the reasons behind this is that misinformation is designed to get an emotional response, so it spreads much faster than the truth. As Gábor Papp, one of students said later: “Aldous Huxley was right, we really failed to take into account man's almost infinite appetite for distractions.”

So, as he concluded, the biggest problem is that people don’t know how to identify or deal with misinformation, that is why news literacy matters: education is the answer to the problem. To be able to tell what is reliable and what is not is a basic skill in today’s society. Using the words of Yale Historian Timothy Snyder he reminded everyone: “to abandon facts is to abandon freedom”.

News literacy means understanding journalism and judging the reliability of news. There are four necessary skills according to Charles Salter:

A lot of misinformation talk goes on Russia nowadays, but other countries do it too, said Daniel Funke. And it spreads, because it is interesting, relevant, easy to share, monetized, it confirms biases and forces an emotional response. Social media also enables it: “misinformation has existed for ever, but it’s so much easier to share now”.

Not only sharing it is very easy: producing misinformation is also easier than doing quality journalism since it doesn’t have quality requirements, and it still can spread with an enormous velocity. While fact-checking and producing quality content takes hours, misinformation can be produced quickly, and then it jumps between platforms. 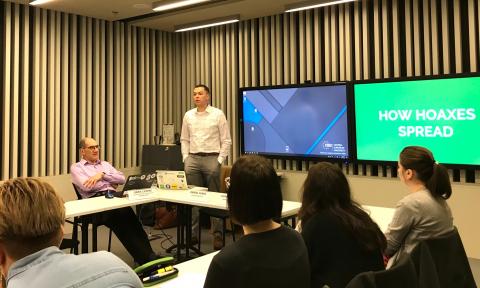 It is not only present on Facebook and Twitter. According to Daniel Funke, “Instagram is super effective, because you are there to have fun”, information mostly comes from friends, so people tend to believe it more. YouTube is full of misinformation as well, especially because its algorithm measures acceleration and rewards it. This is why all the conspiracy theories surface when there is a breaking news. Even Pinterest has become contaminated, to the degree that now it is banned to search for vaccines there. Furthermore, there are closed platforms like messaging apps where it is not even possible to measure anything.

Thus, two claims can be true at the same time: “media are a safeguard against false claims” and “media are also huge amplifiers”. As Daniel Funke said, “it is a Catch-22”: when media covers and perhaps debunks false content, then there is the danger of amplification, but not calling it out is also dangerous.

A Specific Problem in the Region

The Central European region has a specific problem, as it was presented by Marius Dragomir. Misinformation is much more powerful here, it is not only produced by small websites, since governments continue to have a huge influence on public broadcasters that thus function as state broadcasters and often spread misinformation themselves. In addition, governments became the largest spenders in media across Europe. 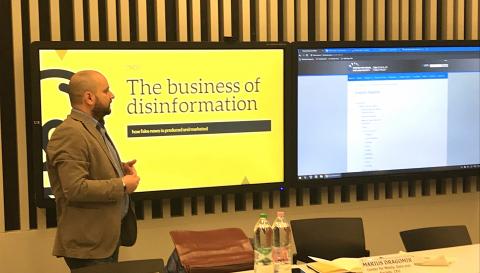 But there is not only home-made propaganda in the region, imported propaganda is also present, it is enough to think about Sputnik’s expansion. Furthermore, there is a problem with poor journalism as well. Possible responses could come from regulators, policy-makers, and more and more from the industry, said Marius Dragomir. Making advertisers aware where they spend their money is a step towards this direction.

The biggest platform of misinformation supply in the region is still Facebook. Many actors producing misinformation try to copy journalism, for example they cite “multiple sources”, however, these sources are often non-existent, or never said anything similar to the quote.

“I think it was an exceptional event, with worldwide experts engaging with young Hungarian students on complex discussions about misinformation and propaganda. I only hope that we will be able to do more such events, but also that we will manage to get more young students from universities outside Budapest”, summarized Marius Dragomir after the workshop.

Participating students were also enthusiastic and satisfied. “There were a lot of topics about which I have already read, but finally there is a complex structure to frame it in one system. All the participants have been very inspiring”, said Anna Flóra Vikár. According to Renáta Gajdos, “it’s very good that the focus wasn’t only on how big of a problem misinformation is, but also on who profits from it and why and how it is spread.” As Izabella Szentpéteri concluded: “I have never learnt so much in such a short period.”

The program is, however, not over yet. Participating students were asked to present a project on the topic of misinformation: how it appears in their context and how it affects their life. With the help of mentors, they are now working on these projects. The best one will be awarded with a trip to visit a media outlet in London.

The panel discussion Fighting Misinformation: How to Build Trust in a World of Liars was also organized in the framework of the workshop. Read more about the discussion here.

The program was funded by the Public Diplomacy Small Grants Program of the U.S. Embassy Budapest Public Affairs Section of the Department of State to be organized by the Center for Media, Data and Society at the School of Public Policy of Central European University in Budapest, Hungary.