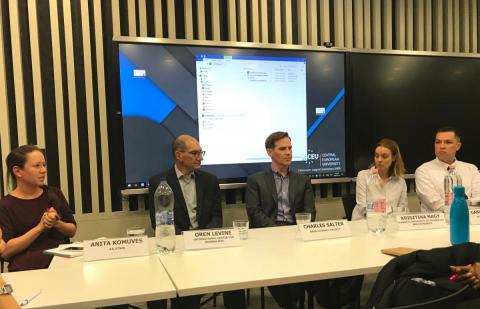 Misinformation exists everywhere and it has been present for thousands of years, but now it can spread with an unprecedented velocity and is very profitable. Media outlets and fact-checkers should keep in mind that there is a battle for attention, and they must gain the trust of their audience. International experts shared their views at the discussion Fighting Misinformation: How to Build Trust in a World of Liars organized by the Center for Media, Data and Society.

The room was fully packed when moderator Anita Komuves, journalist at Atlatszo asked the first question from the participants of the discussion: Daniel Funke, Fact-Checking Reporter at Poynter; Oren Levine, Director of Innovation at International Center for Journalists; Krisztina Nagy Assistant Professor at Budapest University of Technology and Economics and researcher at Mertek Media Monitor; and Charles Salter, Chief Operating Officer at The News Literacy Project.

Anita Komuves reminded everyone that when it comes to misinformation then many people think about Russian disinformation campaigns only, but it is a much a broader concept. She asked guests about their biggest worries related to this issue.

Oren Levine said: “It depends where you are”, because there are different important channels where misinformation spreads in every country. Charles Salter is worried about the development of technology: videos can be manipulated, getting people to say what they never would, and this poses a big challenge, because manipulation is more and more difficult to detect. Krisztina Nagy is worried about online disinformation, about misleading people to cause public harm or to make profit. Daniel Funke is most concerned about closed platforms and less about misinformation on Facebook and Twitter, because on platforms like WhatsApp it is not possible to see where information originates from and how it travels. In addition, it can have direct consequences on people’s life, it is enough to think about anti-vaccination theories. As he put it: “That really keeps me up at night”.

To the question whether there are any cultures that are more immune to misinformation campaigns, Daniel Funke replied that “misinformation exists everywhere, on every topic”, but societies with better education systems do better against it. People have been telling stories, including false ones for thousands of years, Oren Levine continued, so it is not a new phenomenon.

Many studies have shown that a lot of students can’t tell the difference between an advertisement and a news item, added Charles Salter. Hungary is a special case in this sense, according to Krisztina Nagy, since propaganda is supported by the state and at the same time education is very centralized, so it is difficult to bring this topic to schools, and if the school system doesn’t help to improve critical thinking, then it is hard to introduce media literacy.

Oren Levine mentioned two other challenges connected to misinformation: the battle for attention and the need to avoid amplifying bogus content. Daniel Funke had an answer to the latter challenge: decisions on what to debunk should be based on newsworthiness.

Debunking false news items is hard for journalists as well, said Anita Komuves, because debunking falsehoods takes too much time and resource. So she asked: is this the task of journalists?

As a news consumer, Charles Salter wants journalists to fact-check important news items. Oren Levine thinks that they also have to keep in mind what the potential harm is. As he said: “If there is a troll trying to make me angry, then I don’t want to elevate it to a news story. I don’t want to fact-check someone shouting insults on the street.” However, according to Daniel Funke, there is always a pressure from the audience: readers often ask to debunk certain falsehoods, and journalists have to think about them as well. As Krisztina Nagy concluded, there is a task for educators as well: to develop skills of users, not only of journalists.

Charles Salter mentioned some more studies, which found that people who are more tech-savvy can pick up such skills faster, so there is a chance that generations growing up on the internet will be better equipped. Krisztina Nagy cited her experience with students: she has already worked on developing teaching materials with good results: when it was possible introduce them at schools, the students felt that they had developed in critical media literacy as well.

Turning to Russian misinformation that tries to undermine trust, Anita Komuves asked the guests how to fight this phenomenon, how to regain trust. Oren Levine thinks that media outlets should explain their audience why they should trust them, which is a kind of marketing: they should think about themselves as a product and find the balance between their mission and engaging the audience.

Daniel Funke thinks that trust has a relationship-dynamic. Journalists have traditionally seen themselves as messengers, but this approach doesn’t work anymore, because information is available everywhere. So media outlets should be radically transparent to gain trust, explain processes and ask readers for feedback on what they care about.

However, you have to reach the audience in the first place, and facts are often boring when you can share photos of cats, Anita Komuves said. Daniel Funke reminded the audience that fact-checkers were also developing new ways to engage the audience: some regularly debunk falsehoods via Instagram or Snapchat Stories or create memes and “don’t make the audience read a policy memo”. But, as he added, “it is the million-dollar question” how to fight the confirmation bias, how to engage readers and make them believe that what someone they like says may actually be not true.

Anita Komuves mentioned other challenges, for example funding fact-checking, as investors aren’t really interested in it. Daniel Funke thinks setting up fact-checking teams can be profitable, he cited PolitiFact as an example.

Misinformation can spread with an enormous velocity nowadays – this is another big challenge. Charles Salter mentioned the efforts of Facebook and Twitter to remove fake accounts, but, as he said, “it is nearly impossible” to do this even with their own technology. He also reminded the audience that such companies always have business interests as well: their advertisers and investors pay for traffic.

Oren Levine believes that Twitter is a special case, as it reaches mostly journalists, so he returned to the idea of amplification: people learn about a lot of falsehoods because of media coverage on tweets, so it is also the responsibility of media outlets. In addition, there are many non-English-speaking users on social media platforms, and it is very difficult for the companies to handle non-English content.

Daniel Funke agreed: these companies simply don’t have staff to keep up, their primary focus is the U.S., even though most new users are outside. Krisztina Nagy sees some hopeful signs: Facebook promised to introduce the “who paid for political ads” function in the EU as well, not to mention that these companies have to implement European regulation that requires them to be more transparent.

The last challenge mentioned at the discussion was the fact that misinformation is very profitable. Charles Salter thinks that the profit should somehow be removed or at least decreased significantly, but, as he said, “you have to work a lot for it”, and teaching people to have better skills to recognize misinformation is one step in the right direction. According to Oren Levine, increasing the costs of spreading misinformation and decreasing the costs of fact-checking are also part of the solution. Daniel Funke sees some promising steps in this direction, as more and more fact-checkers use automatization.

Finally, Anita Komuves asked whether governments should be involved in this process, but all guests disagreed. As Charles Salter said: “It’s very tricky”. There are governments that received positive press coverage when they introduced laws supposedly to fight misinformation, but then the first targets were their critics, so he thinks that it is really dangerous to grant powers of censorship to any government.

The discussion was organized in the framework of the Workshop on Disinformation and Propaganda for Hungarian Students. The program was funded by the Public Diplomacy Small Grants Program of the U.S. Embassy Budapest Public Affairs Section of the Department of State to be organized by the Center for Media, Data and Society at the School of Public Policy of Central European University in Budapest, Hungary.