Tobias Thomas on Media and Democracies 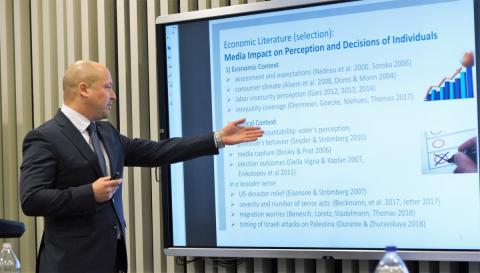 Media can affect perception and worries of people; it can also affect short term voting intentions of citizens. In addition, there is evidence that, at least on German federal level, it still fulfills its function as the Fourth Estate.

Media is once again under scrutiny, said CMDS Fellow Tobias Thomas, Director of Austrian Economic Research Institute EcoAustria and Head of the Political Economy research area at Düsseldorf Institute for Competition Economics (DICE) at the first public talk of Center for Media, Data and Society in 2019.

He recalled Edmund Burke’s statement from 1787, according to which media forms the Fourth Estate as an additional control of government. He also mentioned criticisms of this idea: Public Choice theory stating that media outlets are owned by people with political interest and they can use their power to influence content; also other critics reminding that also governments capture media. In both cases: media cannot fulfill its function as the Fourth Estate any more.

Tobias Thomas presented a selection of his researches and studies on three topics:

Does media affect the perception and worries of people?

Inequality is a hot topic in many countries, said Thomas. However, there is often a huge perception gap on this issue: the way citizens perceive society is different from reality. Interestingly, the share of coverage on inequality doubled in Germany between 2005 and 2015 despite the fact that the income inequality did not change in this timeframe.

Thomas and his co-authors had the presumption that inequality coverage can drive the worries of citizens and found evidence for that: if the share of media coverage on inequality was higher in the three days before the survey-interview took place, the interviewees concerns about the economy and the social fairness in the society were higher as well.

The results were similar with immigration worries, another hot topic: huge media interest and worries about migration were present at the same time. But, as Tobias Thomas said, they had to ask the question: which drives the other one, what is the causal direction? Are people more worried because of more coverage? Or is there more coverage because so many people worry? Or are they independent from each other rinsing because of more migration influx?

So Thomas and his co-authors decided to use an external variation in the media coverage: they found that when a referendum on migration in Switzerland took place, the share of coverage on migration in German media rose significantly, which was followed by increasing worries among German population, thus providing an evidence for the causal direction: additional media coverage drives migration worries.

Does media affect political preferences of the voters?

In other words: are political parties more successful if they are covered more positively, asked Thomas. To find an answer, 10 million news items over 14 years, from 35 German media outlets were coded. In addition, Thomas and his co-authors used the data of a monthly survey measuring voting intention and party affiliation as well. 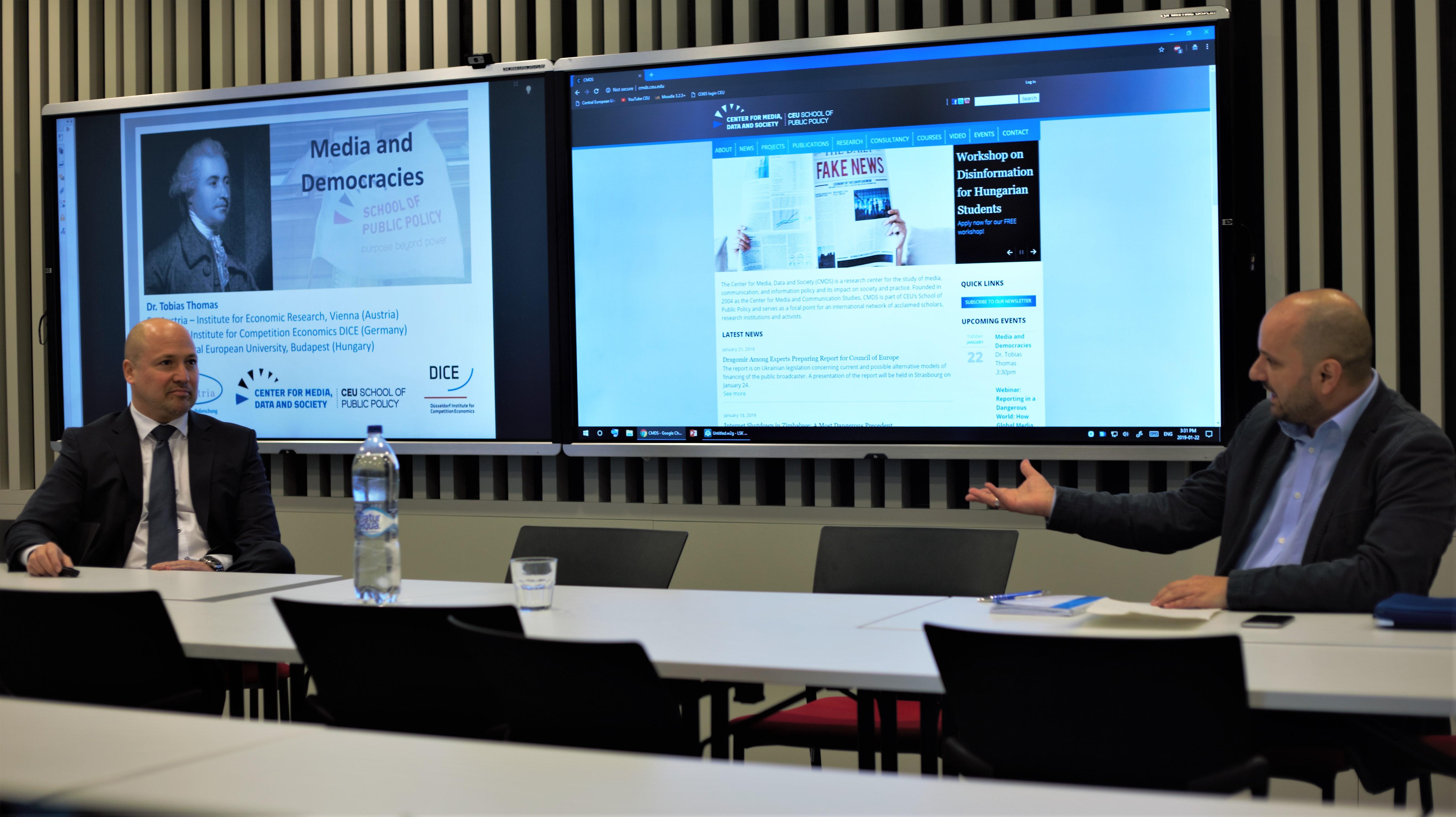 As Tobias Thomas said, they again had to ask the question: what was the causal direction? For example, is the coverage negative on a certain party because of its decreasing popularity, or the opposite?

The researchers used the instrument media spill-overs again, since statistical tests showed that it is an adequate one. As Thomas said, they found that international media coverage on banking industry influenced national media coverage on political parties in Germany, which influenced short-term voting intentions: the more positive coverage on a certain party resulted in higher intentions to vote for that party. However, they also found that it had no significant impact on long-term party affiliations, what is in line with the assumption of rather stable long-term preferences.

Does media deliver as the Fourth Estate in democracies?

In democracies it is of interest if there is a political media bias, i.e. if media outlets favor one or another side of the political spectrum. To find an answer, Thomas and his co-authors investigated coverage on the German Political System between 1998 and 2012. The research focused on the tonality of the media coverage on the two biggest parties, the Christian Conservative CDU/CSU representing the moderate right and Social Democratic SPD representing the moderate left.

As Tobias Thomas presented, a Political Coverage Index (PCI) was set up, which made the political positioning of media outlets possible, by comparing which party a certain media outlet is more or less critical about.

PCI was also used to investigate whether the media fulfils its role as the fourth estate, i.e. providing another level of control for government, or whether there is evidence of media capture. During the timeframe there were different coalitions on the German federal level. The empirical investigation found that there was a connection between the tonality of media coverage and governing parties: when parties belonging to the more right side of the political spectrum formed a coalition, media coverage in general tended to be more left-ish, but when parties belonging to the more left side formed the coalition, media coverage was more right-ish.

So, as Tobias Thomas concluded, this is a kind of anti-government bias, and connected with this, evidence that media fulfills its role as the Fourth Estate, at least on German federal level.