Getting Rich by Smart Lying

In the last few years, making money out of fake news stories has become a sort of post-modern art whereby tech savvy young guns have learnt to make a quick buck using advertising and clickbait headlines. This some-would-say absurd way of making money has followed pop culture trends so fast that creators of fake news sites have found means of making up to US$ 30,000 a month.

In January 2016 alone, BBC found upwards of 140 fake news websites. They were identified mostly following the high audiences they were pulling in via Facebook. That is how the teenagers from the town of Veles, Macedonia came to be noticed as fake news connoisseurs.

The Macedonian case not only cast light on the ease of creating viral fictional news, but also on the role of Facebook’s algorithms in promoting these stories, including its links with advertising sellers as well as lone renegades wanting to earn fast money from made-up stories. Most of these fake stories are often political in nature.

The Psychology of Clickbait

The fake news issue, however, is not just technological in nature, but rather involves a perverse understanding of human psychology. Ads that make quick cash can be placed on any website, so why has fake news become so popular in the last few years?

In the run-up to the 2016 U.S. election, many internet users, particularly in the United States, not only lost a fair amount of trust in big media corporations, but also embarked on a so-to-speak search for truth. This psychological marriage of mistrust and the desire for finding the truth has allowed fake news websites the kind of traction they need to make big money.

Paris Wade and Ben Goldman, the two men behind the fake news site LibertyWriters.com, said they made up to $40,000 per month in the lead-up to the election.

This post-Trump era of fake news resulted in scores of lone tech-renegades creating pop-up websites that generated articles looking and reading like legitimate news sources. The story of Denver Guardian and the fake news industry mogul, Jestin Coler, displays the widely spread web one man can weave and the impunity with which it can function. In late 2016, National Public Radio (NPR) in the U.S. traced down the man behind Denverguardian.com responsible for an untrue story, circulated 1.6 million times, claiming that an FBI agent who was investigating Hillary Clinton was found dead. The story was published three days before the elections in America. Coler wrote: “The people wanted to hear this, so all it took was to write that story. Everything about it was fictional: the town, the people, the sheriff, the FBI guy. And then […] our social media guys kind of go out and do a little dropping it throughout Trump groups and Trump forums and boy it spread like wildfire.”

According to NPR, Coler started to create fake news content around 2013 “to highlight the extremism of the white nationalist alt-right.” Owner of over 25 internet domains, with 20 to 25 writers and a monthly profit varying between US$ 10,000 and US$ 30,000, Coler wanted from the start to build a site “that could kind of infiltrate the echo chambers of the alt-right, publish blatantly or fictional stories and then be able to publicly denounce those stories and point out the fact that they were fiction.” He discovered the power of fake news when one of his websites, NationalReport.net circulated a fictional report about how food stamps were being used by customers at Colorado marijuana shops. The article spread like wild fire, resulting in intervention from state representatives. Coler today owns a company, Disinfomedia, which is one of the biggest in the fake news business by number of followers.

The ABC of Fake News

Anybody with enough initiative can start today a reply-accessible blog. They then buy a domain name for hosting and coding, which can cost as low as US$ 0.01 per month. After downloading a blogging software, sometimes as simple as WordPress, the domain owner can choose a news theme for their website, easily found in online archives such as 101geek.com that lays out the most popular templates. Add a “social media share button” and, voila, the site is up and running. In three easy steps a domestic entrepreneur can set up a platform that can help them earn thousands of dollars just sitting at home.

How big money comes in to play is almost just as simple. Web owners go to portals such as Google’s AdSense, CMPLeader, Bidvertise or Chitika to access ad packages and pop-up advertisements from large scale companies. Fake news websites take three to four of the biggest and most popular ads and optimize them to display without even a scroll-over by the user. 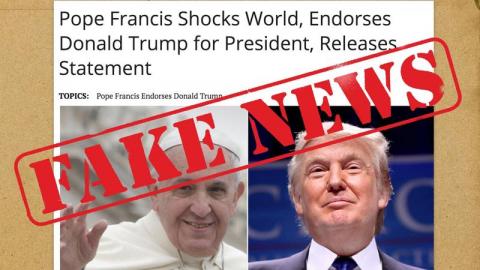 Users are drawn to baited headlines such as the story about Pope Francis endorsing the American President Donald Trump, which was shared by thousands. Each share involves numerous pop-up ads, and every click generate dollars for the website owner. It is this vicious cycle whereby not only fake news websites make quick money, but so do big media firms.

Website owners have to choose a broad category for ads and then advertising selling networks find the ad that perfectly matches the site. Advertisers negotiate with online advertising middlemen the price for each click, and then advertising sellers pay a small part of that to the publisher (the web owner), sometimes a fraction of a cent per click. However, with the kind of traffic fake news websites are receiving, these cents add up.

So, what does the future hold for legitimate news on the internet? It would be naïve to assume that the trend of fake news and its success would diminish after the Trump election. Many of the most circulated articles in 2017 had no political angle at all. Most of the top ten stories widely shared on Facebook based their bait on shock value with headlines such as “Morgue employee cremated by mistake while taking a nap’.

Researchers at the University of Washington have now created a program whereby videos of people can be altered to say anything you want them to say.

With the growth of technology, we can now imagine a future where fake news goes beyond just text, creating a seemingly credible but completely false new reality.

A previous version of this article contained a paragraph about Robert Shooltz's satirical website RealnewsRightNow.com. Since satire and parody are real genres in media and they cannot be put into the same category as mis- or disinformation, mentioning the site in the article was misleading. We apologize for this mistake.

Sahar Haq is a Master's candidate in Public Policy at Central European University. She specializes in digital media innovation, with a particular focus on labour law in South Asia. Prior to attending CEU, Sahar lived briefly in Sudan and then in Pakistan where she worked in research and advocacy.