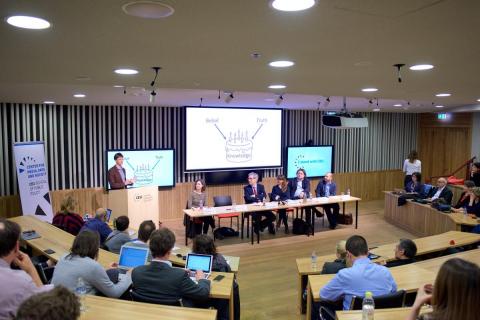 To mark the World Press Freedom Day in Budapest, the Center for Media, Data and Society at the CEU School of Public Policy and CEU’s Institute for Advanced Study (IAS) organized two panel discussions on the challenges and problems independent media and political communication face today, with the participation of CEU President and Rector Michael Ignatieff, CEU faculty, journalists and media activists.

The event began with a brief introduction of the Media Pluralism Monitor (MPM), a study funded by the European Commission that is designed to identify potential risks to media pluralism in Europe. Mario Viola de Azevedo Cunha, researcher, Centre for Media Pluralism and Media Freedom of the Robert Schuman Centre for Advanced Studies at European University Institute gave an overview of the latest trends that were spotted in the soon-to-be-launched MPM2016 report, while Attila Batorfy, resident CMDS fellow who worked on the Hungarian country report for the MPM discussed the alarming results in terms of political influence over media.

Where is independent journalism headed? 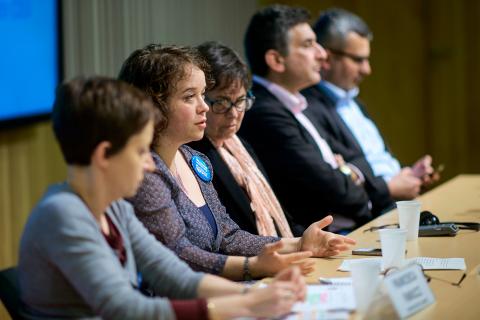 “What does political influence in the media look like today?,” asked Eva Bognar in the first panel discussion of the event. Responding to Bognar’s question, Tamas Bodoky, editor-in-chief of Atlatszo.hu described the current situation in Hungary by saying, “This is not Russia. We don’t get followed, beaten, or shot, but we are discredited and smeared.” He noted that the Hungarian government was now the “biggest media company in Hungary” and that this “can give you the feeling of being outgunned.” SPP Visiting Professor and CMDS Fellow Dean Starkman observed that the Hungarian government is also a major media advertiser and that it uses its advertising budget to favor some media outlets while “punishing” others.

Jody McPhillips, who is regional editor of Organized Crime and Corruption Reporting Project (OCCRP), described some of the many ways in which journalists are pressured these days – and how they are fighting back. She described how journalists are increasingly being trained not just on how to protect themselves electronically, but also how to protect themselves physically. 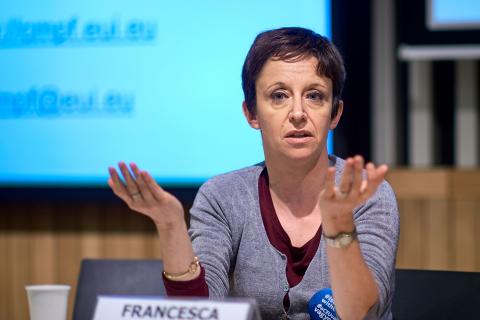 In her remarks, media lawyer and Non-resident CMDS Fellow Francesca Fanucci spoke about surveys that had been conducted in Spain that showed that journalism was the third most distrusted profession (after politics and the judiciary). She explained that the reason people gave for mistrusting journalists was that they were too politicized. Fanucci noted that the public was well aware of the fact that some journalists were close to the government while others were aligned with the opposition. The public had much less appreciation, however, of how financial/economic arrangements could affect journalists’ objectivity. “There is a lack of transparency related to who controls the media,” she said.

Fanucci spoke of journalists’ responsibility to “educate the public.” Panelists also discussed the need to reach the “average person” and to deliver the news in a way that is meaningful to them. They agreed that there were some developments that made it easier to reach people such as the growing availability and decreasing price of certain technologies (such as smartphones).

How to deal with misleading public speech 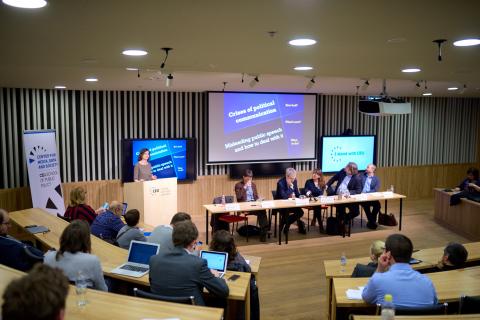 The second panel, moderated by Erica Benner , fellow at IAS and at the Department of Political Science, Yale focused on the crises of political communication and misleading public speech; how serious these threats are and how we should respond to them, from various academic and research angles. Benner asked the panelists to focus on three questions: how bad is the current crisis of political communication, what’s new in the field of misleading public speech and what to do about it?

Simon Rippon, associate professor at the Department of Philosophy and School of Public Policy took a philosophical approach, quoting Plato, who said that “knowledge is tied down to the truth”. Rippon emphasized that our knowledge is based on epistemic authority, warned that motives do matter when we decide to believe someone, and this should not be forgotten. So, why are we experiencing the greatest demagogic threat in democracy? Because we’ve lost confidence, knowledge and the robust link between belief and truth. 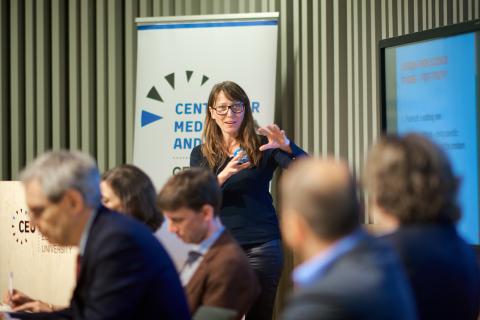 “Anybody can be an intellectual”, started András Bozóki, professor at the Department of Political Science his talk by a quote from Antonio Gramsci, likening it to the digital age, where anybody can be a journalist. Bozóki mentioned that people today feel isolated, atomized and they can easily be manipulated technologically. He recalled that the advent of radio and then, TV, had brought along warnings and fears for their strong potential for brainwashing, so in this sense, there is nothing new, although the digital era marks a difference in having created a huge digital divide and inequality in access to information. Instead of rational dialogues, we now have emotions, and short visual messages can dominate politics. Bozóki emphasized that “the largest propaganda campaign of the past fifty years in Hungarian politics has been the government’s anti-migrant campaign, and in times of growing fear and insecurity, people take refuge in well-established nationalities such as religion and nationalism.” However, let’s not forget that if there’s an organized minority against the disorganized majority, the minority can win. 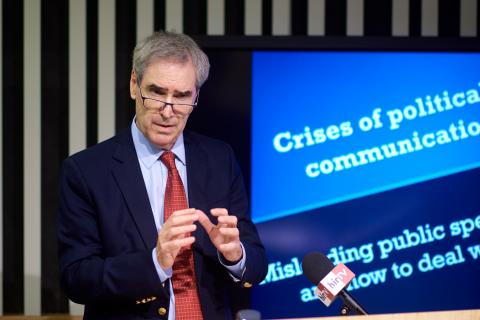 Michael Ignatieff, president and rector of CEU began his speech by emphasizing that academia have earned authority, and our universities play a crucial role in defending our authorities. He also warned that we should not forget, “the merchants of doubts have always been at work” but reality, an infallible test to questions keeps intruding and will always show the deceptions of the merchants of doubt. He emphasized that we need to hold on to the promise of technology, assisting and sharing this knowledge. With regard to the civility of politics, he said that although we lament the loss of this civility, let’s not forget that politics has always been about combat.

Marius Dragomir, director of the Center for Media, Data and Society, School of Public Policy presented the key findings of his recent research into why open society failed and why good journalism lost to populists. He cited a study by Emily Bell and Taylor Owen on how Silicon Valley reengineered journalism, and listed the key reasons for open society’s failure in fighting populism: the failure to fact-check and lack of follow-up on facts; the failure to use and analyze big data beyond purposes of monetization; the failure of the open society camps in terms of feeding into polarization instead of working against it; the failure of academia to use its enormous power to shape public debates, partly by not engaging with popular media, which can be attributed to lack of incentives or training academics how to explain complex issues to the general audience; and finally, the biggest problem of media: the disconnect from the people journalists should actually cover. Dragomir emphasized that there’s a growing need from donors to research trust, and this is a field CMDS is planning to engage with in the near future.