Public Service Media in the Age of Hyper Pluralism 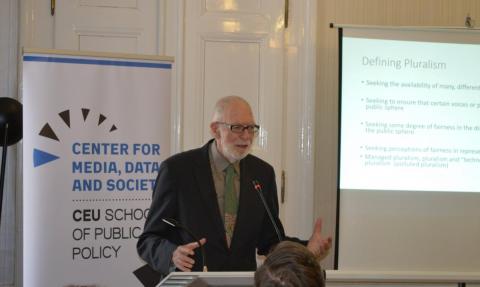 Monroe Price, Director of the Center for Global Communication Studies at the Annenberg School for Communication at the University of Pennsylvania and the founder of CMDS gave a public talk on April 24 on the challenges public service media faces in the era of Internet and satellite.

Price has written extensively on public service media, including how competing interest groups use media regulation to their advantage, what role television plays in influencing democratic societies in a time of increased globalization of the media (Television, the Public Sphere and National Identity), how the state controls the media for political ends, including "self-regulation," media regulation in conflict zones or the control of harmful and illegal content (Media and Sovereignty) and, most recently on  how drastic changes in technologies and geopolitics have generated a shift in the way states and other powerful entities think about the production and retention of popular loyalties, and how the emerging forms of this new strategic communication impact free speech. (Free Expression, Globalism and the New Strategic Communication)

We are now experiencing a move from “managed pluralism” (where entities and algorithms decide how pluralism is ensured and what voices get represented) to the era of “hyper pluralism”, where there is an infinity of voices and personalized, individual media.

Public Service Media has traditionally had a function of representing the unrepresented, serving as a sort of lubricant of democratic society and a safety valve for the cartels of the industry. These are the roles it has been set up to fulfil in the time of “managed pluralism” but the question is: what happens to these roles in the era of “hyper pluralism”?

Price went on discussing how the conception of market loyalties and the cartels’ employment of regulation to access to information channels have worked so far, using public service media to allow for some representation of voices that otherwise would be excluded and ensuring that there is adequate pluralism but not too much. However, as we’re moving to a period of hyper realism, cartels can’t function in the same way they did before and can’t exert control over representation and access.

While what we are now experiencing is in many ways a completely new media environment, not only for public service media but all players of the industry, with millions of plural society caves triggered by algorithmic pluralism, this may lead to the rediscovery of the old roles of public service media, including its role as a bridge between conflicting views and distinct ideological bubbles.