The Crux of the Problem, in Defending Media Pluralism, Is Political, CEU Rector Tells EU 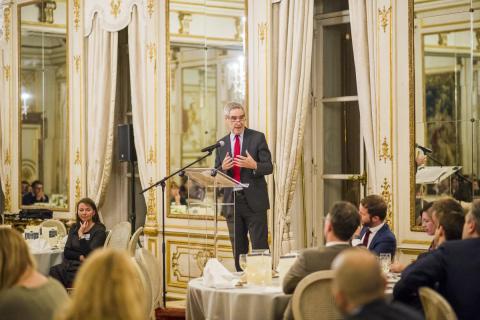 Speaking on 17 November 2016 at the second Annual Colloquium of Fundamental Rights, a pan-European pow-wow of journalists, state officials, NGOs, media companies and academics, Michael Ignatieff, the CEU president and rector, said that an overwhelming issue in the times we live in is “the malign interaction between populist politics and the new social media.”

The raft of big changes in technologies and communications are triggering a series of massive shifts in today’s power dynamics. We live a Gutenberg moment, Mr Ignatieff said. “Just as the printing press helped create a new politics in 16th century Europe—Luther’s Reformation—and with it popular empowerment of those who could read printed Bibles and sermons, so today digital technologies are disempowering established authority: from newspaper editors to political parties, while conferring raw power into the hands of ordinary people equipped with smartphones.”

When this shift happens, a fierce battle to seize those dispersing knots of power is taking place. It is “a chaotic struggle of old elites to hold onto power and new elites to seize it,” Mr Ignatieff said.

The rise of digital media has changed the thinking about media pluralism in Europe. The old debate in Europe was about what policies and sets of regulation to put in place to spawn an agora, a pluralistic public sphere. Digital technologies have been praised for being disruptive. Thanks to these technologies, young people fed up by corruption of elites, can effective and cheaply voice their frustrations and anger.

But here is the problem, Mr Ignatieff said. “Digital technologies also fragment the agora.” We are no longer in “a shared deliberative space” but we lock ourselves inside filter bubbles: digital news feeds built by algorithms according to our stream of preferences. Through this algorithm-based, preference-driven consumption of information, we, in fact, “give consent to our own isolation from our own societies” and reduce our exposure to discord and disagreement. This “algorithmic segregation” threatens the agora on which a pluralistic democracy depends. “Brexit and the American election have jolted us all awake to the fact that we no longer share the same agora, the same democratic space, with those who vote differently from us,” according to Mr Ignatieff. “Without an agora, we do not confront the often radical difference of our fellow citizens’ perspectives, values and lived experience.”

Digital technologies equally alter politics. As a former MP in Canada, Mr Ignatieff shook an estimated 30,000 hands. Only few of those citizens were disagreeable or hostile. “Face to face with my fellow citizens, civility ruled. The Internet was another story. As they say, on the Internet nobody knows you’re a dog. Anonymity encourages disinhibition. Our politics has become ferocious, personal, driven by digital disinhibition.” This “digital disinhibition” fuels social hostilities, which populism is relentlessly harnessing and unleashing.

Digital disinhibition also exacerbates the politics of enemies. Politics is not understood anymore as a battle between adversaries, but rather as a clash of enemies, which is a central belief in populist thinking. “The aim of populist politics is to defeat your enemies, not to maintain a shared political space for deliberation and disagreement,” Mr Ignatieff said. “These enemies may be corrupted and entitled liberal elites; they may be foreigners and migrants; they may be people of different races. Whatever they are, they are enemies, and populist politics exists to protect the ‘true’ people of a country.”

Politics of enemies, algorithmic segregation and digital disinhibition: together they form the chief threat to pluralistic democracy today. Media pluralism is a big part of that. Protecting it is more momentous than ever. In Mr Ignatieff’s opinion, this is a political issue. “The crux of the problem, in defending media pluralism, is political: devising a strategy, country by country, election by election, to win the battle of ideas with the populists. Europe can help, but the battle will be won or lost in each country,” he said.

Following two days of consultations, the EU officials made a series of commitments about the European Commission’s role in protecting media pluralism. Marius Dragomir, Director of the Center for Media, Data and Society (CMDS) at the CEU School of Public Policy, spoke about the emergence of a new power dynamics that includes new political forces, technology companies and media conglomerates. The effect of this power dynamics on media diversity has to be properly researched. Abuses must be staved off, he said in a panel at the conference about media freedom and independence from political pressures. Mr Dragomir endorsed some of the key recommendations made at the meeting, particularly those aimed at limiting excessive power in the media.

In her concluding remarks, the justice commissioner Vera Jourova said that the threats to the financial viability of media businesses, political pressures on independent media, intimidation and soft censorship of journalists are serious threats to media pluralism. We can’t take the existence of free and pluralistic media for granted anymore, the commission’s first vice-president Frans Timmermans said.

A key priority for the commission next year will be to allocate funding to support journalists to develop expertise in digital security. The commission is also planning to launch in the course of the coming months a public consultation on what the EU can do to protect whistleblowers. Whether that will translate into a new piece of EU law is yet to be decided.