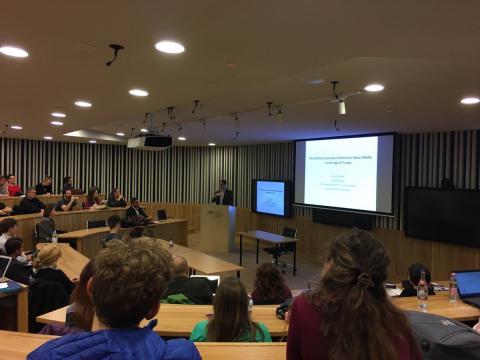 “It is a really interesting time to be talking about politics and media,” observed Victor Pickard, associate professor of communication at the Annenberg School for Communication, during a public lecture at the Center for Media, Data and Society (CMDS) at CEU’s School of Public Policy on October 12. Pickard, who has written extensively on media in the United States, went on to note that there were many signs that the health of the media system in the United States these days is “sub-optimal.” Pickard said that this was of particular concern in a democracy because “a healthy democracy requires a healthy press system.” The primary reason for the crisis in American media today, according to Pickard, is its strong reliance on ad revenue.

Pickard said that this reliance on ad revenue had created “the perfect storm” for a structural journalism crisis. It also explains the disproportionate news coverage that the Trump campaign received during the primary campaign: 327 minutes of coverage compared to 121 minutes for Hillary Clinton and 20 minutes for Bernie Sanders. Pickard cited the CEO of CBS News Les Moonves who said about the Trump campaign, “It may not be good for America, but it's damn good for CBS.”

Pickard noted that other democracies have chosen to fund their media systems very differently than the United States. Canada, for example, spends $27 per capita to fund its media system; Denmark spends more than $100 per person. The United States, on the other hand, spends just $1.43 per capita on media (not including donations from the public).

Although there is enormous evidence that media in America is in trouble – a 40% decline in newsroom staff jobs at daily newspapers since 2007and significant drops in advertising revenue are just two examples – there has been “virtually no public policy response to this social problem yet,” according to Pickard. He went on to observe that while a free press is essential to a healthy democracy, there hadn’t even been a conversation about the topic.

Pickard said the roots of the current media system in the U.S. can be traced back to a series of policy battles that took place in the 1940s. Out of these battles emerged a media system that would be self-regulated, guided primarily by industry-defined social responsibility, and be protected by a negative reading of the First Amendment – one that favored media companies’ freedom from regulation over individuals’ freedom to a robust media system.

Pickard said that Americans were not “ideologically inclined to accept” public media subsidies, which he described as “the last best hope for journalism.” They are instead “doubling down on ad options like native advertising,” which refers to paid advertising that looks very much like regular content and appears on many digital platforms these days.

In concluding his talk, Pickard laid out some things that he thought the U.S. government could and should do to save its media system: provide universal/open access to broadband internet and expand public and nonprofit media. To those who are wary of government involvement in the media, Pickard said, “the state is always involved in media. The question is how it’s involved.”